Email us for expert advice 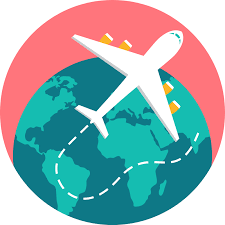 Hiking, trekking, biking, rafting, and kayaking adventures all over the world, made for outdoor types. 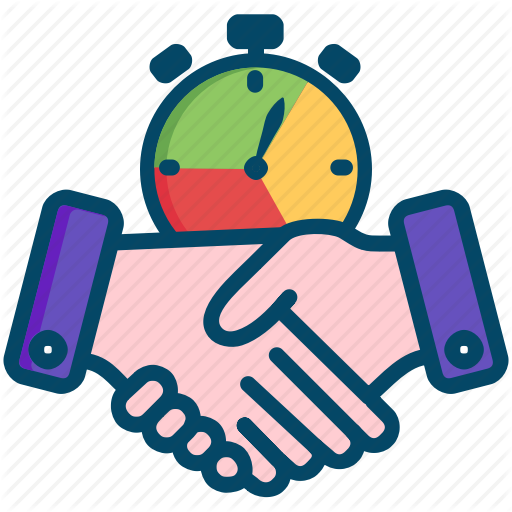 Camping most nights with some hotel stays to start and throughout. 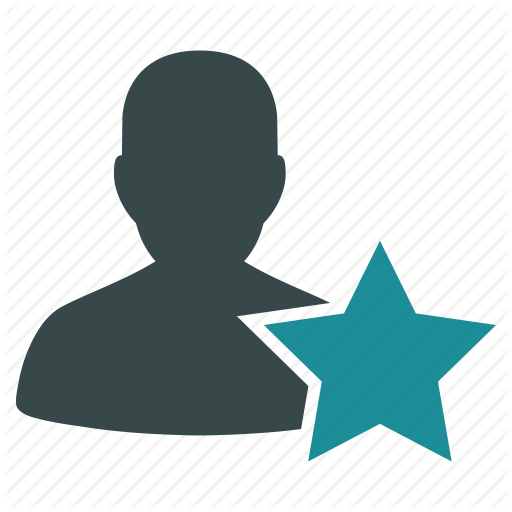 Serious high-altitude hikes, cycling, or other instances of heavy exercise. Come prepared to sweat a bit. 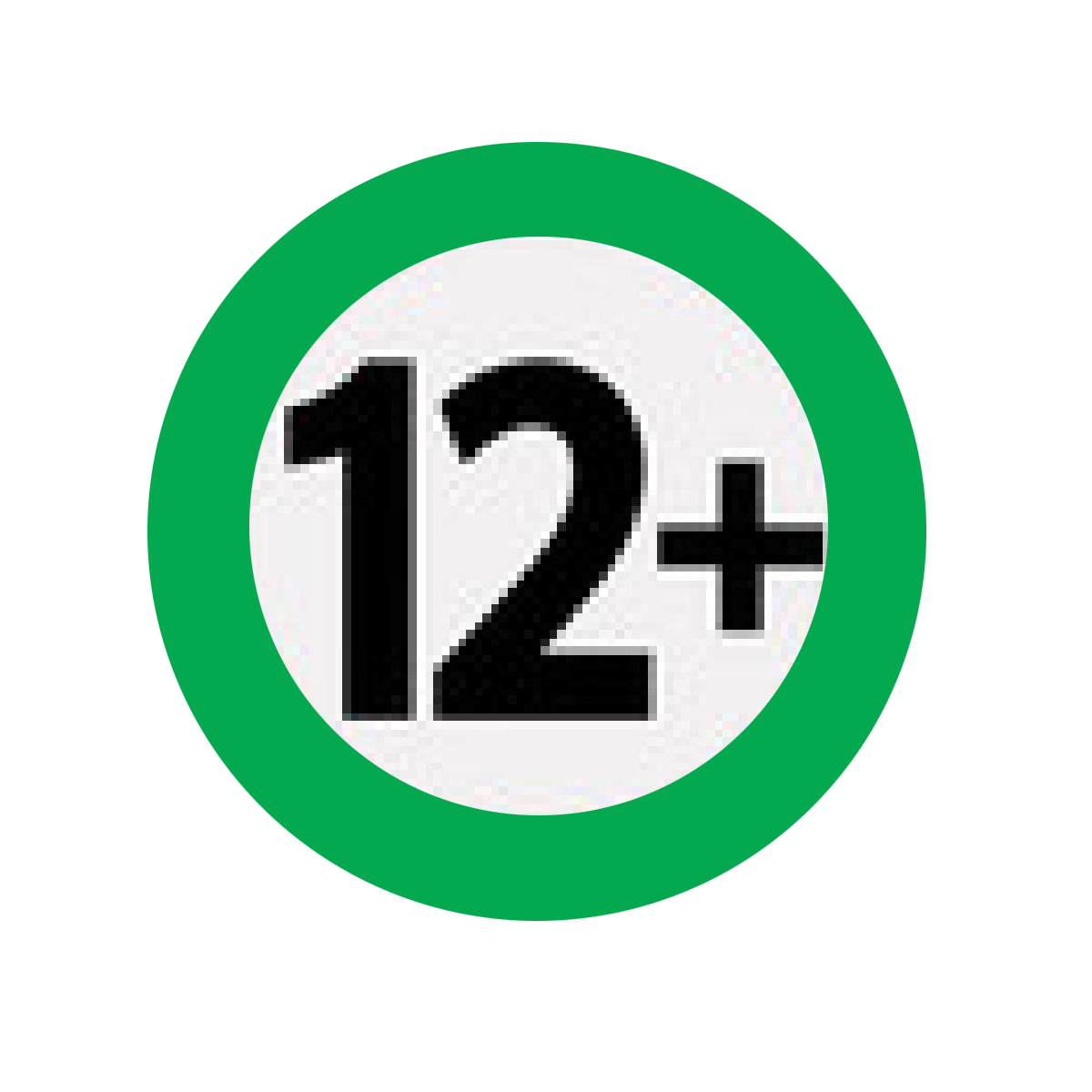 All travellers under age 18 must be accompanied by an adult.

Machame is one of the most popular routes of Kilimanjaro.

Amongst the few old Kilimanjaro trekking routes, Machame is the prime one. Not only the oldest route but also Machame Route is the most populous one. The hiking via Machame starts at the rainforest zone and further traverse through rest 4 climatic zones.

Machame is widely known as the Whisky route. Machame Route offers quite a scenic view. The route is a popular choice by many trekkers due to its scenic view and high Success Rate. Out of All 6 Ascending Kilimanjaro Routes, Machame is preferred by 50% of the climbers.

There are 2 reasons for the popularity of Machame Route.

However, the Kilimanjaro Machame Route is a bit difficult for the climbers to climb up. The ascending through Barranco Wall on day four is the hardest one. The steppe climbing is though a complete non-technical climb.

If you are someone who has decent physical strength, Machame Route is highly recommended. The route offers a great acclimatizing opportunity following the “walk high and sleep low” rule. Hence around half the population of the climbers prefer Machame to ascend.

Compared to the Marangu Route, Machame offers a long itinerary. Usually, the Kilimanjaro Machame Route takes 6 to 7 days for ascending to the Uhuru Peak.

The hike to the Uhuru peak starts from the foothill and continues through the cultivation zone. The rest of the hiking goes through 4 more different zones such as;

The first stopover during the hike is at Machame Camp at the elevation of 9,350 ft. From Machame Camp the hike further goes to the next stopover Shira 2 camps elevated at 12,500 ft.

The trekking next takes the trekker to Lava tower from where you have to hike Shira 2 camp. Crossing Lava tower the hiking continues to the Barranco camp elevated at 13,044 ft.

Our next stop is the Karanga camp elevated at 15,331 ft. From Barranco, the hike goes up to Karanga Camp from where the further hike continues to Barafu camp.

From Barafu camp the final hike continues to the Uhuru peak at 5,895m. From there the descending starts following Mweka route crossing through Mweka camp and Mweka hut.

Why To Choose Machame Route?

SOME OF OUR FAVOURITE TRAVEL GUIDES

One of the most popular routes, Machame Route offers stunning views and varied landscapes. Beginning with the vibrant lush foothill forest the route offers 6 to 7 days of the itinerary.

The various campsites along the routes are –

Machame Route offers a great opportunity to follow the acclimatizing rule. It allows walking high and sleep low profile so the acclimatizing rate is much better. However, the route is bit steppe but preferred one due to its 86% success rate.

Each year around 20339 travellers are Climb Mount Kilimanjaro via Machame Route. We have a good Kilimanjaro Successful Summit Rate. So, with Ascend Tanzania you can be sure of getting to the top!

As preferred by the 50% trekkers are coming for Climbing Mount Kilimanjaro via Machame Route it is mostly crowded. Looking for a better opportunity to acclimatize and don’t have problem with crowd? Then go for Machame, the best one for Climbing Kilimanjaro.

Offering a great opportunity to follow the walk high and sleep low Kilimanjaro Machame Route has the best acclimatizing feature. The route is a highly successful one due to being a very good acclimatizing trail route.

The route offers an excellent opportunity to enjoy the scenic beauty of the mountain. Covered with the spectacular landscape, the Machame Route often called the Whisky Route.

Machame Route has two variations with a 6 or 7-day itinerary. Both options include a climb high, sleep low acclimatization day. Machame has a significantly higher success rate with a seven-day route.

It is additionally one of the least expensive courses because of its simple access and shorter itinerary.

To avoid blisters be sure to wear your climbing boots before your adventure to Kilimanjaro.

Stay hydrated and carries a reusable water bottle to reduce the effect of Kilimanjaro Altitude Sickness.

Before your trek, attempt Embark on a few practices outdoors excursions to get acquainted with your environment.

Prepare a Kilimanjaro Packing List and triple check you have everything you need before you go.

Don't forget to stop and take it the view en route to the summit. After all, the journey is the best part.

To avoid blisters be sure to wear your climbing boots before your adventure to Kilimanjaro.

Stay hydrated and carries a reusable water bottle to reduce the effect of Kilimanjaro Altitude Sickness.

Before your trek, attempt Embark on a few practices outdoors excursions to get acquainted with your environment.

Prepare a Kilimanjaro Packing List and triple check you have everything you need before you go.

Machame Route or the "Whiskey Route" is unique amongst all other routes of Kilimanjaro. As it has a pleasant perspective and changed scene it’s one of the preferred roués of Kilimanjaro.

Be that as it may, moving through Machame Route is somewhat troublesome when contrasted with the Marangu course. Kilimanjaro Machame Routes offers a longer itinerary but the success rate is quite high in comparison to Marangu.

Machame route isn’t very hard, however, the trekking down is more tiring. The route offers many high points and low points during the hike.

Accordingly, the course is most appropriate for individuals with some climbing or trekking encounters and for the individuals who love experiences. For amateurs the climbers, the course can be tiring.

Machame Route begins from the south, heading towards the east, exploring underneath the southern ice fields in front of summiting.

For the most part, the base days to Climb Mount Kilimanjaro through this course is six, however, seven days is prescribed. 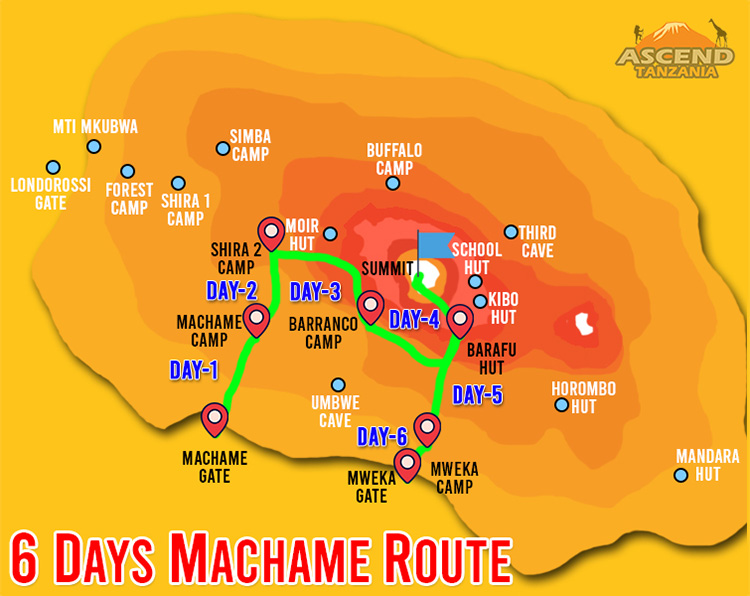 Our 6 days Machame route is perfect for those who want a thrilling as well as adventurous experience amid their journey. The Machame route, also known as the Whiskey route, is one of the most popular routes on Kilimanjaro. Compared to Marangu, Machame offers a bit more challenges. However, the route offers a high success rate.

The 7 day Machame Route variation is the ideal schedule for this route. On the 7 day Machame route, the trek from Barranco to Barafu hut is broken up into two days. The extra day added at Barafu hut is great for acclimatizing. This is important because summit day begins very early, around midnight, so climbers are sleeping deprived going into the... 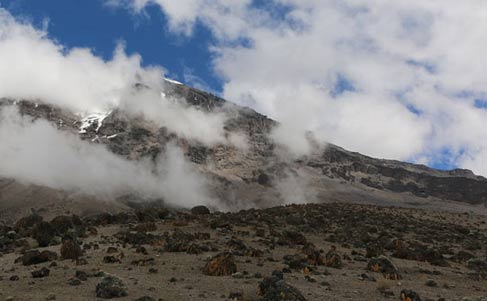 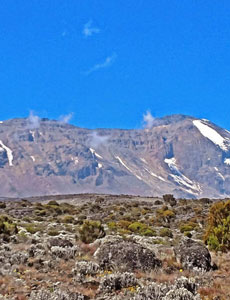 Lets Jump In And Look At The Various Kilimanjaro Routes. Find The Differences And Decide The Best Routes For Summit.

I recently climbed Mt. Kilimanjaro for The Make A Difference Organization. We used Ascend Tanzania and they were awesome! Our guides were very professional, knowledgable and made sure we had fun!

The mountain is incredibly amazing and wonderful!! Definitely the highlight of the 4 months I spent in Tanzania! You should hike the mountain with Ascend Tanzania, our guides Tino and Roman were awesome, super knowledgeable, and very reassuring as we made our trip up. The rest of our team was also amazing. They always had smiles and made the trip very enjoyable. Ascend Tanzania is the way to go.

Unbelievable experience trekking Mt. Kilimanjaro via Lemosho route with “Ascend Tanzania” Guide Company. Our two guides Eric and Bruno were very professional, knowledgeable, experienced, and extremely helpful. It wasn’t an easy climb but we all made it to the top (thanks Eric and Bruno) The whole trip was really nicely organized including safari after the climb. One day I will do this again and I will look no further than Ascend Tanzania. Again thanks Freddy, Eric and Bruno….you guys Rock!!!

Having been living and volunteering in the Kilimanjaro region of Tanzania for many months and staring at Mt. Kilimanjaro on a daily basis, I knew I wanted to attempt the climb before returning home to Canada. I was put in touch with Fred from Ascend Tanzania through the director of a local NGO who used his company for fundraising climbs with groups from North America. Right off the bat, Fred was so welcoming and helpful in preparing for the climb, answering my many questions, and providing me with the gear I needed (as I had not brought any technical mountain gear from home). I climbed with a guide named Erik and some wonderful porters and it was such an incredible 6 days. Walking at a slow pace to ensure acclimatization, enjoying such filling and good food, and being so taken care of while on the mountain made the trip such a success! We enjoyed an incredible summit and stunning 360-degree views as the sun came up over Kenya… what an experience! Thank you to Freddy, Erik, and the rest of the team at Ascend for doing a great job!

My group and I climbed the Macheme route with Ascend Tanzania. I had a great experience with the climb and the guides. The guides were very helpful and did everything they could to help us get to the top. All in all, it was a great trip and I would recommend Ascend Tanzania in the blink of an eye.

HOW IT FEEL WHEN YOU PLAN YOUR KILIMANJARO 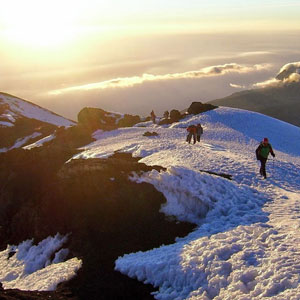 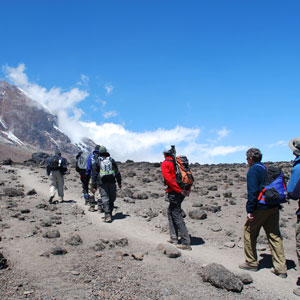 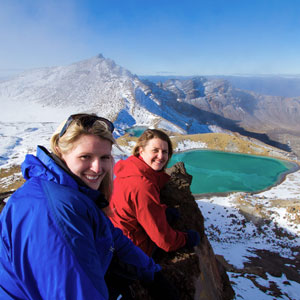 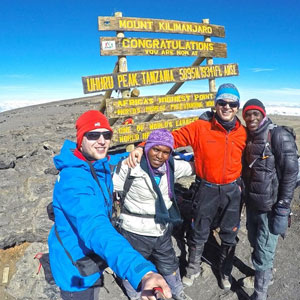 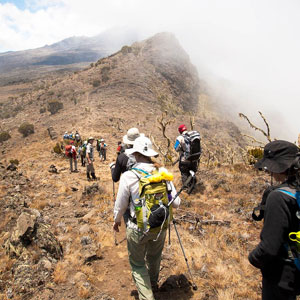 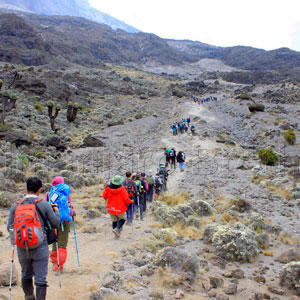 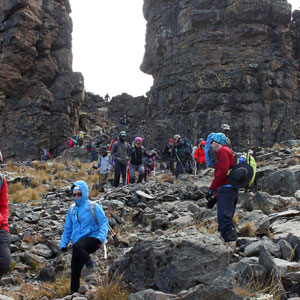 WHY CLIMB KILIMANJARO WITH US? 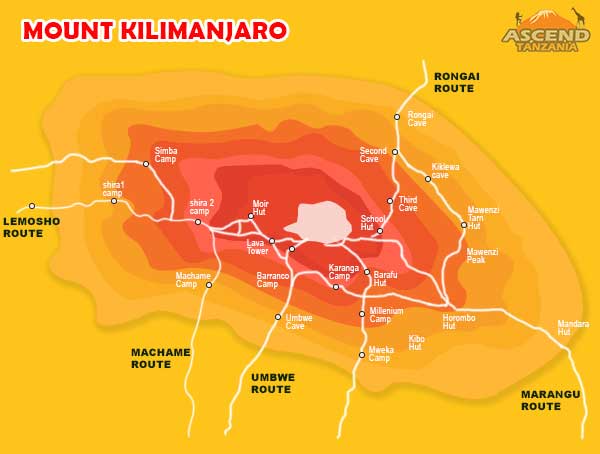 Sign up to our newsletter to receive our latest deals, news, and competitions.

Have a question? Enter your details & choose a time that works for you. 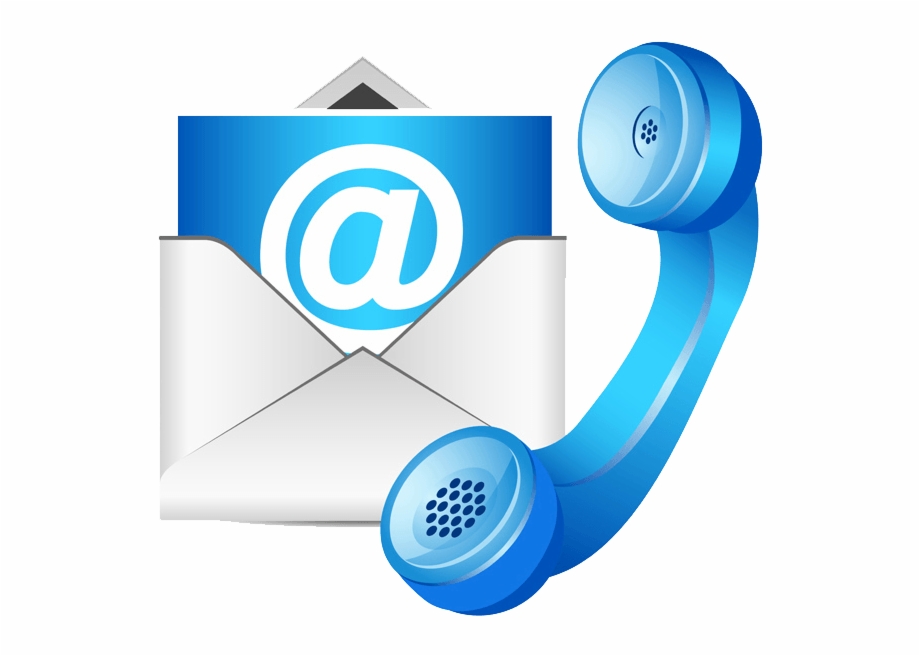 We are available between 10am and 8pm

Have a question? Enter your details & choose a time that works for you.

We are available between 10am and 8pm