How High is Kilimanjaro?

Do you know Mt. Kilimanjaro has changed its size and height many times? Have you ever thought how this majestic mountain has come to notice and what are the key attractions that have been dragging thousands of trekker’s attention?

There are around 30,000+ trekkers (which is almost near the Everest trekkers’ number) trying to climb the summit of Kilimanjaro every year. Acquiring a height of 5,895m height the mountain is the highest peak of Africa as well as one of the prime summits of the world.

Climbing Mount Kilimanjaro is one of the most demanded hikes, not only within the mountaineers but also in between the non-hikers who are just enthusiasts about an experiencing an adventurous event.

Formation of the peaks:

This largest volcanic mountain having 3 peaks namely Shira, Mawenzi and Kibo was formed after volcanic eruptions millions of years ago. Mawenzi and Kibo, ‘melted’ together after subsequent eruptions and Kibo is considered as the highest with its Uhuru Peak.

While Climbing Mount Kilimanjaro the majestic peak pops many questions in mind like when the peak first came to notice, how it got its name or what is the history behind the changing heights of the mountain. There is a long history however few questions are still mysterious like how the mountain got its name. There is no proper data/theory behind the name of this snow-capped peak. The discovery of stone bowls hinted that there was a human presence on the foothills of Kilimanjaro million years ago, probably a millennium before Christ.

The mountain came on the spotlight in 1889 when German geology professor Hans Meyer completed his summit to the peak of the mountain. He gave 3 attempts to hike, however, he failed on the first 2 while 3rd attempt was successful.

The second iconic Climber who signed her name on the history of Climbing Mountain Kilimanjaro is Gertrude Benham; a girl of 22 ages who belonged to London conquered the summit in 1909 all alone by herself. Her crew of porters couldn’t dare to step on after a few meters of hiking for the melting snow. Gertrude Benham was believed to ‘immune’ to mountain sickness.

Interesting fact:  "The first highest mass climbing was on 1939, Kilimanjaro witnessed 58 trekkers and the numbers has just gone upward each year from then."

Kilimanjaro Trekking takes a minimum of 5 days to hike its summit where Everest Base Camp trek is around 12 days. The base camp of Everest is on 5,380 m where Kilimanjaro peak lies on 5,895m.

Mountain Kilimanjaro has many interesting features apart from its majestic height that drives the trekkers crazy. Due to being the highest summit of Africa, it acquires the title of “Roof of Africa”.

Looking for conquering the summit of this rustic mountain? Plan a trek with one of the most reliable trekking operators Ascend Tanzania who ensures a 100% safety and successful climb to the Uhuru Peak of Kilimanajro.

Had an amazing experience climbing Kilimanjaro. our Lead guide Erick was super helpful and always made sure. 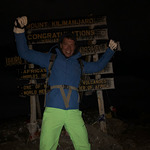 Had a great trip with Tino and his team. Every aspect of our trip was well planned and well communicated.

Responsible For Your Safe…

Best Tips To Get Ready Fo…

A Story Of Success And De…

How Long Does It Take To …

All You Need To Know To Climb Kilimanjaro

Join A Group To Climb Kilimanjaro